“Why worry about building a colony on Mars when instead you could float one high above the surface of Venus? Science fiction writer Charles Stross recently revived the idea of building a Venutian colony when he suggested, cheekily, that billionaires ought to be compelled to donate to massive humanity-improving projects. He suggested two: a Manhattan Project-like focus on developing commercial nuclear fusion, or the construction of a floating city on Venus.

The second planet from the Sun might seem like a nasty place to build a home, with a surface temperature hot enough to melt lead and an atmosphere so dense it would feel like being submerged beneath 3000 feet of water. But the air on Venus thins out as you rise above the surface and cools considerably; about 30 miles up you hit the sweet spot for human habitation: Mediterranean temperatures and sea-level barometric pressure. If ever there were a place to build a floating city, this would be it. Believe it or not, a floating city might be a feasible project. Scientist and science fiction author Geoffrey Landis presented a paper called “Colonizing Venus” [PDF] at the Conference on Human Space Exploration, Space Technology & Applications International Forum in Albuquerque, New Mexico back in 2003. Breathable air floats in Venus’s soupy carbon dioxide atmosphere, which means on Venus, a blimp could use air as its lifting gas, the way terrestrial blimps use helium to float in our much thinner atmosphere.

A group of science fiction authors and scientists have been discussing the idea on the blog Selenian Boondocks, which founder Jonathan Goff describes as “a blog I founded to discuss space politics, policy, technology, business, and space settlement.” One of the biggest problems with a lunar or Martian colony is that an astronaut’s bones and muscles deteriorate in low gravity. No one knows yet how much gravity a human needs to prevent deterioration, but Venus’s gravity is the closest to Earth’s, at about 9/10ths. Mars only has a third of the gravity that the Earth does, while the moon has a mere sixth.Atmospheric pressure is also crucial. Think of the difference between jabbing a car tire and letting air out of a half-inflated balloon. Gases seek equilibrium. Since there’s barely any atmosphere on the moon or Mars, a rip in the hull of an enclosed human habitat would suck oxygen out at tremendous force. Thirty miles above Venus, it would merely seep out. This also means a Venutian cloud colony wouldn’t need as much reinforcement. Venus has other boons, too. Its rich atmosphere blocks radioactivity and could be mined for useful materials. And with a gentle temperature, far less energy would have to be spent on heating or cooling the colony. 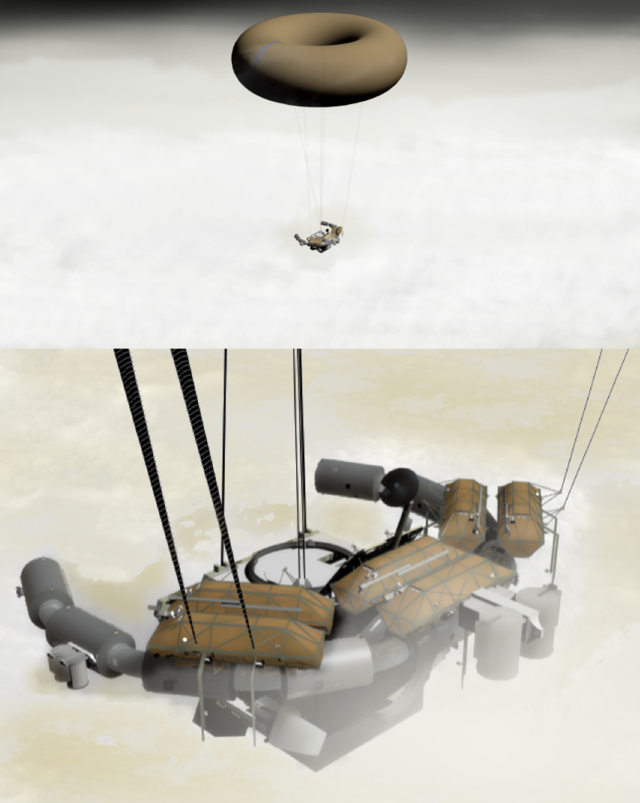 “A hypothetical floating outpost 30 miles above the surface of Venus.”

Of course, it’s hard enough landing on the surface of another planet, let alone at 30 miles above the surface, but Landis hypothesized a way to do it. A sphere with titanium skin 0.04″ thick would be able to survive reentry and float a couple of miles above the surface, he argued. Goff, who who describes himself as a space entrepreneur and space settlement advocate, suggests that rocket stages (the parts that drop off of a spaceship during liftoff) could also be engineered to float after use and be re-used, providing a way to and from the colony so that building materials could be mined from the surface. The well-informed space enthusiasts who frequent the Selenian Boondocks also helped Goff map out the chemical processes required to extract breathable air (a mixture of nitrogen and oxygen), water and various fuel and construction materials.

After the chemical processes involved with producing life-supporting materials are demonstrated and perfected, the Selenian Boondocks team suggest small robotic labs could be sent to Venus, where they would bob in the atmosphere, extracting life-sustaining materials, gradually inflating great bladder-like structures (perhaps a Bigelow Aerospace module made of Kevlar). Years into the project, it might look like a gargantuan bunch of grapes. Permanent settlers could tether these floating blobs together, extending walkways and building platforms, creating something that might eventually look like a massive floating oil rig, complete with tubes dangling dozens of miles below to gather materials from the surface.

Goff plans to continue fleshing out the details on his site over the coming months (plans were temporarily put on hold after the birth of his youngest child). “I still need to talk about chemicals that seem easy to get to from the raw materials,” he says, “and how those impact colony design.” As to what life perched high above Venus might really feel like, frequent Selenian Boondocks commentator George Turner imagines how a tough colonist might dangle meat into Venus’s ferocious, acidic atmosphere as a cooking source:

One day perhaps we’ll see this handy Venus tip: To properly cook your turkey, put it outside at an altitude of 35 km where the temperature is 455 Kelvin (360 F), the pressure is 6 atmospheres, and the density is 6.8 kg/m^3, and leave it there for three to four hours…

Why put it in a plastic bag? The small amounts of sulfuric, hydrofluoric, and hydrochloric acid should act like lemon juice to help tenderize and cook the meat, and the inert CO2, N2, and argon atmosphere should do no harm at all, kind of like roasting it over a nice warm fire…

Acid is good for meat, and breaks down connective tissue, fats, and tenderizes it. Run the pH the other way and it turns into soap and you might as well bite into a urinal cake. Venus is not for the timid, or people too afraid to shove a fat bird out the airlock and let the harsh laws of thermodynamics do the work…

Ultimately there will have to be a compelling reason to spend trillions of dollars to move off-world: a vital resource located on Venus, mass over-crowding, nuclear apocalypse. But if we do colonize the skies of Venus, it will be the soft factors like the plausibility of a Venutian acid-baked cuisine that will make us stay.”