From the archive, originally posted by: [ spectre ]

“A former wartime fortress which is now a self-proclaimed independent state has been left devastated after a fierce blaze tore through the structure. The so-called Principality of Sealand, seven miles off the coast of Felixstowe and Harwich, was evacuated at lunchtime yesterdayafter a generator caught fire. Thames Coastguard, Harwich RNLI lifeboat, Felixstowe Coastguard rescue teams, firefighting tug Brightwell, the RAF rescue helicopter from Wattisham and 15 Suffolk based firefighters from the National Maritime Incident Response Group (MIRG) were all called into action to tackle the blaze.

One man, believed to be a security guard, was airlifted from the scene and taken to Ipswich Hospital with smoke inhalation but no one else was on the Second World War gun emplacement. Emergency services were first alerted to the drama just after midday when eyewitnesses noticed huge clouds of black smoke billowing out of the concrete structure, which is owned by self-styled King Roy Bates. Brian Ironman, who was fishing just off Sealand along with his dog Rosie, said he noticed something was wrong around 11.30am. “I’d been fishing nearby since 7am for smoothhound and tope and just before lunchtime I noticed there was a lot of smoke coming from the back end of the tower,” he said. “I immediately thought something was wrong and called the coastguard straight away. They were here fairly quickly and there were about five or six extinguishers trying to put the fire out. “The helicopter also arrived and I think it picked up one person who was on the platform.”

Andrew Beal, a council worker from Trimley who watched events unfold from his beach hut at Brackenbury, said: “There was thick black smoke billowing out of the gun emplacement. Air sea rescue was heading out at high speed and hovered over the platform and appeared to be taking someone off. “There were several other vessels heading out, including a lifeboat, and there was a boat out there hosing it down. The smoke was hundreds of feet high in the air.” Rod Markham, who runs angling trips out of Felixstowe Ferry in his boat Tracy Jane, was able to see the excitement from his house. “At first I just thought they were stoking up the generators because there is always a bit of smoke – I never realised it was on fire,” he said. “But when I looked back after I’d messed about a bit in the garden I saw there was a big deluge of black and that’s when I saw the lifeboat and tug were there.”

Firefighting tug Brightwell from the port of Felixstowe was despatched to the scene and doused the flames with vast amounts of water. A team of 15 off-shore firefighters from the National Maritime Incident Response Group (MIRG) were also assembled but after a reconnaissance of the area from the air it was decided it was too dangerous to land. Keith Churchman, of Harwich Royal National Lifeboat Institution, said: “The damage is very extensive. The fire started in a generator and spread quickly to the accommodation. “There have been a number of explosions on board as the fire has engulfed gas bottles and batteries. Only one person was on Sealand at the time, whom we understand to be a watchman whose job was to maintain the generators and equipment. “A team of firefighters was flown to the scene but because of the damage to the structure they decided not to go on board. “A firefighting tug sprayed the whole structure with water in the hope this would eventually cool the fire and starve it of oxygen.” A spokesperson for Suffolk Fire Service confirmed the fire was left to burn itself out and was under control by 3.10pm.” 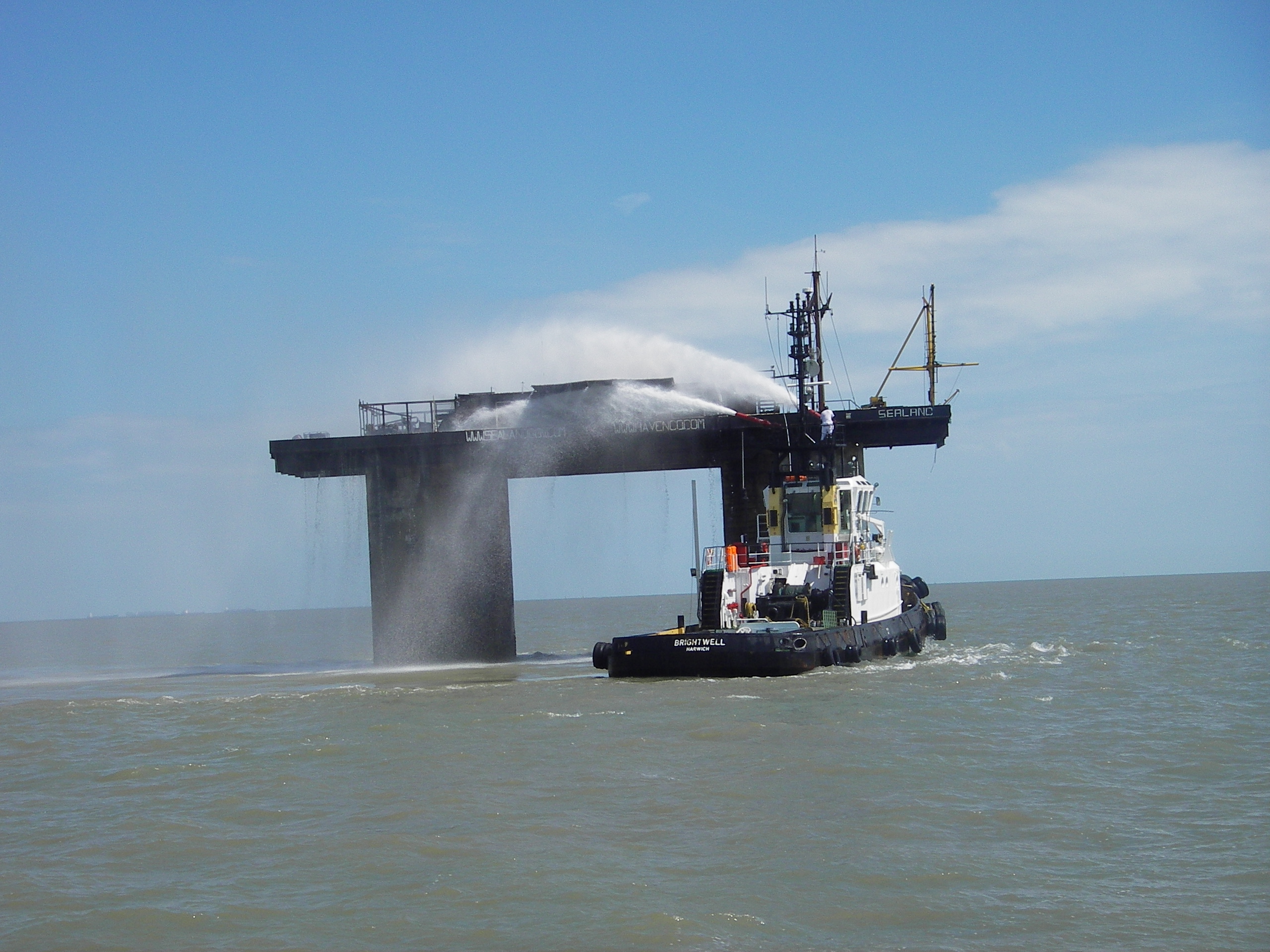 “Sealand’s royal family today pledged to rebuild its “country” – and to repair all the damage caused by the fire which devastated half of the independent kingdom. Michael Bates told the Evening Star the family would not give up its ownership of the former war-time fort and wanted to carry on running it. He was visiting his parents, Major Roy Bates and his wife Joan, the self-styled prince and princess rulers of Sealand, at their home in Spain when he heard about the blaze, which was reported in later editions of yesterday’s Evening Star.

Last night he was flying back to the UK to his Essex base, and hoped to visit the old Roughs Tower, seven miles off Felixstowe, over the weekend. He said: “We need to assess the damage and see what has happened. “Of course, we will rebuild it. We have done a lot of work in there over the years to make it very nice and it is a big part of our family and its history. “But as yet we do not know the full extent of the damage or how this fire happened. “I have been told it was fire in a generator and the generator room will be gutted, but how much other damage there is we will have to wait and see. “I understand the fire tug was able to pump some water in through smashed windows to the fire, and it appeared to be out very quickly.”

The fire tug pumped a blanket of water over the structure all afternoon to try to extinguish the fire. He said there was about to be a crew change at the former gun emplacement – which is manned constantly – when the generator caught fire. He said the man airlifted off by a helicopter rescue crew from Wattisham air base and taken to hospital was called Chris, but would not give his surname. He said the man had inhaled smoke and was undergoing tests at hospital. It was the first time there had been a fire in the chequered history of the 932 sq yard mini-state, which was founded in 1967, and has been home to pirate radio stations and more recently an internet company.

Witnesses watched in amazement as a huge plume of smoke started to rise from one of the legs of Sealand – and boats raced to the scene. As the drama started to unfold seven miles off the coast, people watched with binoculars and telescopes, others shaded their eyes from the sun and squinted out to sea. Evening Star editor Richard Cornwell was with his wife Rachel on the clifftops in Hamilton Gardens eating their lunch when they spotted the smoke. Mr Cornwell said: “It was hard to tell at first whether the smoke was coming from Sealand or a ship’s funnel somewhere in the distance behind the structure. “We rang a friend on the seafront who has a powerful telescope and he said it was definitely Sealand and he could see flames shooting out of the left-hand pillar of the fort.

“Then we spotted the fire tug coming out of the harbour really fast and followed a few minutes later by the Harwich inshore lifeboat. “At first there was not much smoke at all, but it quickly grew into a huge thick black plume which then drifted northwards for several miles. “There appeared to be several other boats in the area, but no-one venturing too close. “The rescue helicopter arrived, winched the man off very quickly and flew back with him to hospital. It returned later and hovered near the fort for about 20 minutes in case it was needed. “Through binoculars we could see the tug pumping a wall of water at the structure and over the top of it from its powerful jets.” Seafront worker Bruce Harrison said: “It was quite spectacular. The amount of smoke was huge and people kept saying there must have been an explosion. “Everyone is always fascinated by Sealand and visitors often ask what it is.”

“Sealand was built as a North Sea war-time fort called Roughs Tower in 1941 at a cost of £1m. Its two 70ft concrete towers weigh 4,500 tons and contain seven storeys of living quarters. Visible from Felixstowe seafront, it was used for pirate radio stations in the 1960s. In 1967, Roy Bates, now 82, a wealthy businessman and former 8th Army Royal Fusiliers major, and his wife Joan, a former beauty queen, declared it as the sovereign state of Sealand. It has its only currency, flag, stamps, national anthem, constitution and laws. Over the past four decades the weatherbeaten structure has been the scene of many colourful incidents and its history is as chequered as any of the most volatile hot spots around the world. There have been at least seven attempts by raiders to try to seize it from the Bates family with petrol bombs, shotguns and hand-to-hand fighting. One German man was even imprisoned for seven weeks before receiving a royal pardon, and in the 1990s there was considerable concern after Interpol found forged Sealand passports being used to launder money from drug smuggling.”