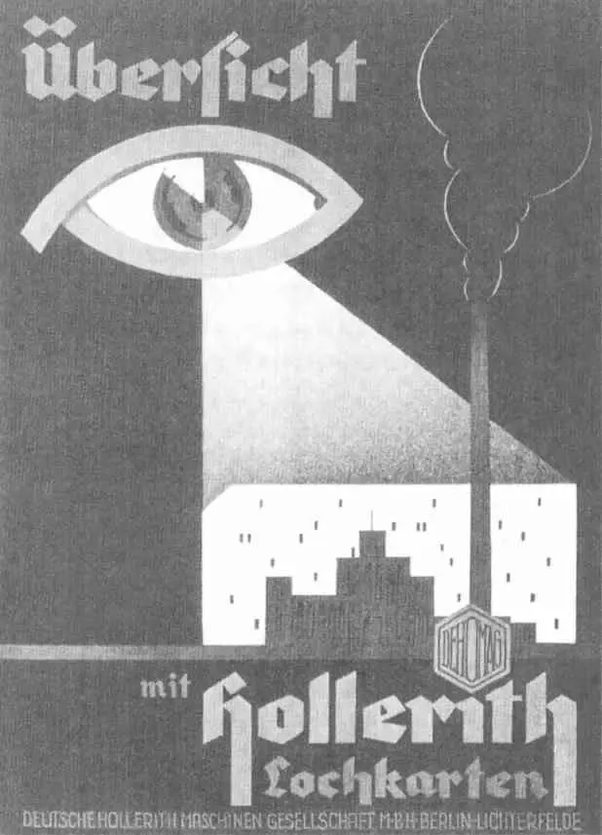 “See everything with Hollerith punch cards”

“…When the Nazis invaded and occupied France in 1940, René Carmille seized an opportunity to save the lives of French Jews. He was a punched-card computer expert and comptroller general of the French Army as well as an agent for the French Resistance. He also owned and managed the Demographics Department in Vichy, France, which housed information-processing machines for census forms. After the invasion, the pro-Nazi Vichy government ordered a nationwide census. Carmille requested the assignment of compiling data from the census forms onto tabulator cards for analysis. His group transferred the data, including information from Column 11—where citizens were asked to indicate their religion—onto tabulator cards. They were instructed by the Nazis to sort the cards and print a list of all Jews living in France so that they could be located and sent to concentration camps. Over the course of two years, Carmille and his group purposely delayed the process by mishandling the punch cards. He also hacked his own machines, reprogramming them so that they’d never punch information from Column 11 onto any census card. Instead, Carmille’s groups spent most of their time using the information on the cards to find and recruit former French soldiers for the French Resistance. Carmille successfully sabotaged the assignment until 1944, when the Nazis discovered what he was doing. He was arrested, tortured, and sent to the concentration camp in Dachau, Germany, where he died the following year. Despite his tragic end, Carmille saved an untold number of lives…”

“…The electronic tabulating machine developed by Herman Hollerith for the 1890 U.S. census was the direct predecessor of the machines used to track down Japanese Americans for internment during World War II. Hollerith’s punched-card system—which stored coded information on perforated paper cards—was one of the foundations of the company that became IBM, whose German subsidiary provided technology for the Nazis extermination campaign against Jews and other perceived enemies.

The French experience in WWII is also instructive. Some credit René Carmille as the first ethical hacker because he stalled Nazi demands to get France’s Jewish population registered by machine. As Lars Heide details, Carmille was a loyal public servant under both republican and Vichy France, a keen exponent of data in the service of the state. He was one of the “key public employees to pioneer the introduction of national registers,” during an era of industrial rationalization and the growth of bureaucracies and military organizations, all fed by the need for accessible information.

The work Carmille’s national demographic and statistical office did for Vichy was a national census, collecting “date and place of birth, parents, marriages, divorces, children, date of death, nationality, address—but nothing concerning religion.” (Though a largely Catholic country, France had a strong tradition of secularism.) Four pictures of the person were included with these records, which were stored on two punch cards apiece. Another project was done on the sly, compiling a list of men able to serve in the military, should France’s military rise again.

The national registry was a big project—nearly 2000 people were employed, “operating 233 punches, 22 sorters, 14 tabulators and 7 reproducers.” Heide stresses that “Germans do not appear to have shown much interest in the national register or to have considered its potential, which limited the danger it posed.” They were interested in two other data sets, however. One was a 1941 census of professions that asked if employees were of the “Jewish race.” The other was a special census of Jews carried out by the police. Carmille claimed his office had little time for processing these because of the magnitude of the national registry. Vichy police and the Gestapo would ultimately have to use the old-fashioned paper method of record-keeping.

“Hundreds of thousands of concentration camp prisoners across Europe were registered with standard pre-printed paper Inmate Cards, called Haftlingskartei, approved by IBM to be compatible for its punch card process.”

While Carmille didn’t re-write code or introduce a bug in the system, his “hacking” was akin to sabotage, throwing a bureaucratic wrench into the machine. Heide calls Carmille’s initial form of resistance passive, a serious “departure from the loyal public servant he had been.” But resistance is full of terrible compromises. In 1943, his office had to compile at least two lists, one of 50,000 men, to supply forced labor for Germany. Carmille himself was tortured and murdered by the Nazis for being a member of the Resistance, just a few months before Liberation.”

“You thought, perhaps, that there was nothing fresh left to write about the Holocaust. Think, sadly, again. Edwin Black, a dedicated, even driven, researcher, has a new charge sheet to present. It shows, in compelling detail, that IBM, ‘the solutions company’, was also the company of the final solution.

How did Hitler, from 1933 on, find, herd and exterminate millions of his Jewish victims with such sickening precision? Easy. IBM, through its German subsidiary, Dehomag, ran his censuses and surveys on its unique punch-card tabulators. It provided the vital infrastructure for persecution and the the silence of the gas chambers. What is more, it knew exactly what it was doing.

“Thomas Watson, head of IBM, meeting with Hilter circa 1933”

Thomas Watson, the chief executive who built one of America’s greatest international enterprises, did not receive the Merit Cross of the German Eagle for nothing, but for services knowingly rendered. Watson is the villain of this piece. He was a classic American success story, the sewing-machine salesman who became corporate emperor, president of the International Chamber of Commerce and chum of FDR, but also a covert admirer of the Third Reich who peddled his hanging chads with fawning eagerness. There is no scope for doubt. Black has a relentless flow of memos, letters and speeches.

When Watson wrote in 1937 (long after his punch cards had begun their whirring work) that the world ‘must extend a sympathetic understanding to the German people and their aims under the leadership of Adolf Hitler’, he had the clearest knowledge of what those aims entailed. His fractious underling at the Dehomag subsidiary put it yet more chillingly: ‘We are very much like physicians,’ he told his Nazi audience, ‘in that we dissect, cell by cell, the German cultural body… these are not dead little cards; quite to the contrary, they prove later on that they come to life when they are sorted at 25,000 an hour according to certain characteristics.’

As the war took hold, Watson found himself trapped between a PR rock and a ruthless hard place. He sent his medal back and disavowed his German clients, but he still kept the tabulators turning, still gathered the profits, was still on hand as the conflict ended to turn Dehomag into IBM Germany and go marching on. That, in a sense, is all you need to know. It is a distinctive contribution to the history of the time. It wholly justifies Black’s years of toil.

At such a distance, however, the reader inevitably looks for understanding beyond the damning facts, for a more contemporary relevance to set multinational America wriggling uneasily in its chair. Such parallels are easy enough to construct. ‘Watson was no fascist. He was pure capitalist. But the horseshoe of political economics finds little distance between extremities. Accretion of wealth by and for the state under a strong autocratic leader fortified by jingoism and hero-worship was appealing to Watson. After all, his followers wore uniforms, sang songs and were expected to display unquestioned loyalty to the company he led.’

Alas, though, Black loads the dice of depravity too relentlessly to make his symbols resonate. He isn’t unfair to Watson or the old IBM in the sense that, on such evidence, unfairness is impossible, but the repetitiveness of his polemical interludes grows wearying. Selecting 25 quotes from the New York Times doesn’t paint the full context of the era. Eschewing any mention of Britain, Churchill or Chamberlain draws the focus of what he says was ‘obvious’ to the world too narrowly. If we’re to feel the full horror of Watson’s deceptions and manoeuvres, we need to see him in the round, not merely as yet another rent-a-tyrant of a tycoon.

The facts (to reiterate) speak for themselves. Hitler would have had his Holocaust without IBM’s willing efforts, but it would have been a longer, less clinically efficient business. IBM helped the trains to his concentration camps run on time, spewed out the cards for slave labour and watched its stock-market majesty grow. It was the backbone of Auschwitz and Roosevelt’s first social security programme, a ‘service industry’ which existed to serve whoever paid the bill and not to make moral judgments until forced to confront them. That, in itself, is a terrible warning from this brilliantly excavated past. It is what Black knows and, thus, all we need to know: findings that need no emotion or righteous anger; findings that speak for themselves.”