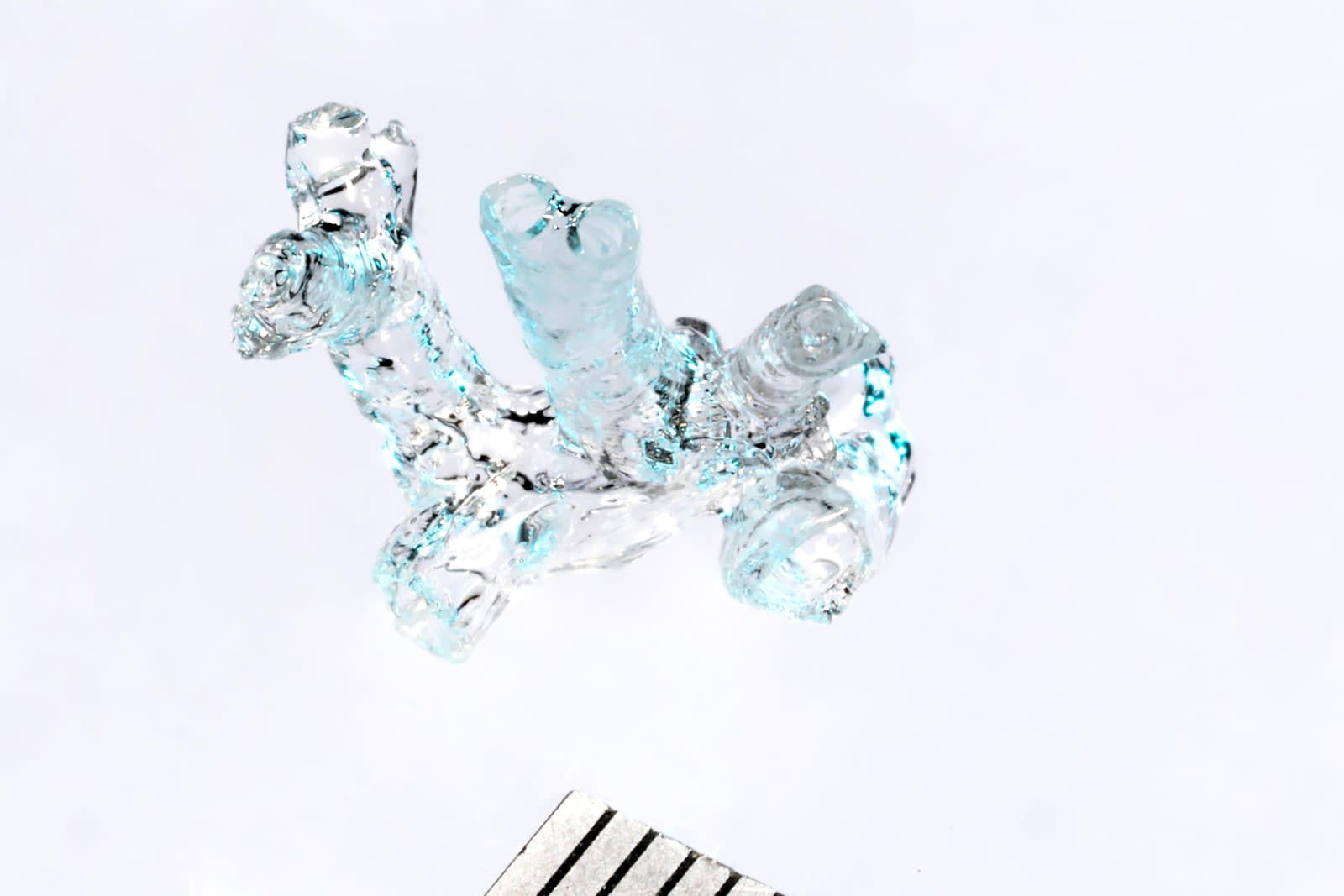 “Bioprinting holds great potential for repairing injuries, testing drugs or replacing whole organs, but it’s currently limited in complexity, viability and speed — you can’t just create tissue on a whim. Soon, though, it might be a matter of crafting whatever you need when you need it. Scientists at EPFL and University Medical Center Utrecht have developed an optical system that can bioprint complex, highly viable living tissue in “just a few seconds.” It would represent a breakthrough compared to the clunky, layer-based processes of today.

The approach, volumetric bioprinting, forms tissue by projecting a laser down a spinning tube containing hydrogel full of stem cells. You can shape the resulting tissue simply by focusing the laser’s energy on specific locations to solidify them, creating a useful 3D shape within seconds. After that, it’s a matter of introducing endothelial cells to add vessels to the tissue. The resulting tissues are currently just a few inches across. That’s still enough to be “clinically useful,” EPFL said, and has already been used to print heart-like valves, a complex femur part and a meniscus. It can create interlocking structures, too.

While this definitely isn’t ready for real-world use, the applications are fairly self-evident. EPFL imagines a new wave of “personalized, functional” organs produced at “unprecedented speed.” This could be helpful for implants and repairs, and might greatly reduce the temptation to use animal testing — you’d just need to produce organs to simulate effects. This might be as much an ethics breakthrough as it is a technical one.”

“A journey to Mars will take several months, and humans won’t be able to turn back if an astronaut suffers a burn or a bone fracture. Which is why scientists at the University Hospital of Dresden Technical University have now produced the first bioprinted skin and bone samples for use in space. Even though treating patients with 3D-printed skin or bones is still in its early stages back on Earth, the technique is particularly vital in space, where the human body doesn’t heal as quickly. “In the case of burns, for instance, brand new skin could be bioprinted instead of being grafted from elsewhere on the astronaut’s body, doing secondary damage that may not heal easily in the orbital environment,” said Tommaso Ghidini, head of the division at the European Space Agency that oversees the project, in a statement.

Scientists were faced with the unique challenges of creating a technique that would still work in zero gravity. So, the team invented a method of 3D printing that would work while upside down. They thickened human blood plasma, which is used to bioprint skin cells, with plant material so it could work in altered gravity. To 3D print bones, they added calcium phosphate bone cement to printed human stem cells. The calcium phosphate works as a structure-supporting material, and is absorbed by the body as the bone grows.

The samples are just the first steps in a long journey to make this type of 3D printing ready for space. A self-contained spacecraft can only hold so much. The project is looking into what kind of onboard facilities would be needed, such as surgical rooms and equipment, for astronauts to perform the 3D bioprinting on their own.”