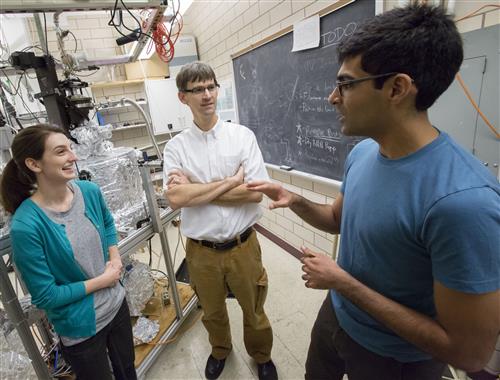 “Excitonium has a team of researchers at the University of Illinois at Urbana-Champaign… well… excited! Professor of Physics Peter Abbamonte and graduate students Anshul Kogar and Mindy Rak, with input from colleagues at Illinois, University of California, Berkeley, and University of Amsterdam, have proven the existence of this enigmatic new form of matter, which has perplexed scientists since it was first theorized almost 50 years ago. The team studied non-doped crystals of the oft-analyzed transition metal dichalcogenide titanium diselenide (1T-TiSe2) and reproduced their surprising results five times on different cleaved crystals. University of Amsterdam Professor of Physics Jasper van Wezel provided crucial theoretical interpretation of the experimental results.

Excitonium is a condensate—it exhibits macroscopic quantum phenomena, like a superconductor, or superfluid, or insulating electronic crystal. It’s made up of excitons, particles that are formed in a very strange quantum mechanical pairing, namely that of an escaped electron and the hole it left behind. It defies reason, but it turns out that when an electron, seated at the edge of a crowded-with-electrons valence band in a semiconductor, gets excited and jumps over the energy gap to the otherwise empty conduction band, it leaves behind a “hole” in the valence band. That hole behaves as though it were a particle with positive charge, and it attracts the escaped electron. When the escaped electron with its negative charge, pairs up with the hole, the two remarkably form a composite particle, a boson—an exciton. 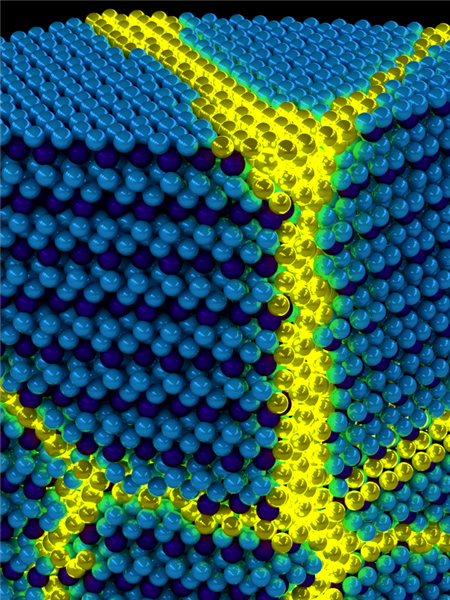 “Artist’s depiction of the collective excitons of an excitonic solid. These excitations can be thought of as propagating domain walls (yellow) in an otherwise ordered solid exciton background (blue).”

In point of fact, the hole’s particle-like attributes are attributable to the collective behavior of the surrounding crowd of electrons. But that understanding makes the pairing no less strange and wonderful. Why has excitonium taken 50 years to be discovered in real materials? Until now, scientists have not had the experimental tools to positively distinguish whether what looked like excitonium wasn’t in fact a Peierls phase. Though it’s completely unrelated to exciton formation, Peierls phases and exciton condensation share the same symmetry and similar observables—a superlattice and the opening of a single-particle energy gap.

Abbamonte and his team were able to overcome that challenge by using a novel technique they developed called momentum-resolved electron energy-loss spectroscopy (M-EELS). M-EELS is more sensitive to valence band excitations than inelastic x-ray or neutron scattering techniques. Kogar retrofit an EEL spectrometer, which on its own could measure only the trajectory of an electron, giving how much energy and momentum it lost, with a goniometer, which allows the team to measure very precisely an electron’s momentum in real space. With their new technique, the group was able for the first time to measure collective excitations of the low-energy bosonic particles, the paired electrons and holes, regardless of their momentum. 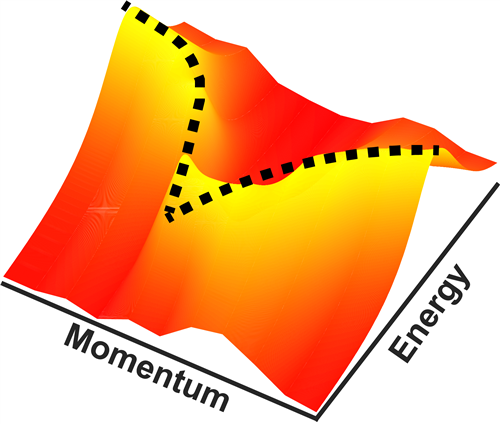 “Relationship between energy and momentum for the excitonic collective mode observed with M-EELS.”

More specifically, the team achieved the first-ever observation in any material of the precursor to exciton condensation, a soft plasmon phase that emerged as the material approached its critical temperature of 190 Kelvin. This soft plasmon phase is “smoking gun” proof of exciton condensation in a three-dimensional solid and the first-ever definitive evidence for the discovery of excitonium.“This result is of cosmic significance,” affirms Abbamonte. “Ever since the term ‘excitonium’ was coined in the 1960s by Harvard theoretical physicist Bert Halperin, physicists have sought to demonstrate its existence. Theorists have debated whether it would be an insulator, a perfect conductor, or a superfluid—with some convincing arguments on all sides. Since the 1970s, many experimentalists have published evidence of the existence of excitonium, but their findings weren’t definitive proof and could equally have been explained by a conventional structural phase transition.”

Rak recalls the moment, working in the Abbamonte laboratory, when she first understood the magnitude of these findings: “I remember Anshul being very excited about the results of our first measurements on TiSe2. We were standing at a whiteboard in the lab as he explained to me that we had just measured something that no one had seen before: a soft plasmon. The excitement generated by this discovery remained with us throughout the entire project,” she continues. “The work we did on TiSe2 allowed me to see the unique promise our M-EELS technique holds for advancing our knowledge of the physical properties of materials and has motivated my continued research on TiSe2.”

Kogar admits, discovering excitonium was not the original motivation for the research—the team had set out to test their new M-EELS method on a crystal that was readily available—grown at Illinois by former graduate student Young Il Joe, now of NIST. But he emphasizes, not coincidentally, excitonium was a major interest: “This discovery was serendipitous. But Peter and I had had a conversation about 5 or 6 years ago addressing exactly this topic of the soft electronic mode, though in a different context, the Wigner crystal instability. So although we didn’t immediately get at why it was occurring in TiSe2, we did know that it was an important result—and one that had been brewing in our minds for a few years.”

The team’s findings are published in the December 8, 2017 issue of the journal Science in the article, “Signatures of exciton condensation in a transition metal dichalcogenide.” This fundamental research holds great promise for unlocking further quantum mechanical mysteries: after all, the study of macroscopic quantum phenomena is what has shaped our understanding of quantum mechanics. It could also shed light on the metal-insulator transition in band solids, in which exciton condensation is believed to play a part. Beyond that, possible technological applications of excitonium are purely speculative.”

[This research was made possible by generous support from the Gordon and Betty Moore Foundation’s EPiQS Initiative. Development of the new M-EELS instrument was supported by the U.S. Department of Energy Center for Emergent Superconductivity, an Energy Frontier Research Center. Please see journal article for entire funding acknowledgement.]