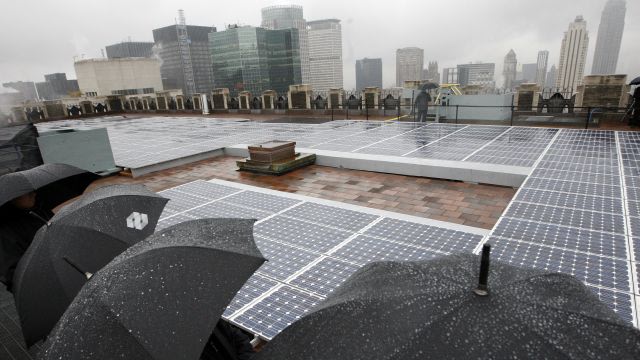 “We already harness sunlight and wind to generate electricity, so why not other forms of weather? A team of researchers has designed a solar cell, like those in solar panels, that they say can generate electricity from both sunlight and rain. And this sort of dual production could solve the dilemma of needing ideal weather conditions for efficient generation, like a bright sunny day. “All-weather solar cells are promising in solving the energy crisis,” a team of researchers from Ocean University of China and Yunnan Normal University writes in a new paper published in the Angewandte Chemie journal. “The new solar cell can be excited by incident light on sunny days and raindrops on rainy days.”

The scientists use dye-sensitized solar cells, thin film photovoltaic cells that act a bit like photosynthesis. When light hits the dye in the cells,  this excites electrons, which kick off the electrical generation. This is similar to chlorophyll in plants, transferring energy. In this case, the solar cells are coated with a thin layer of graphene. Because graphene is quite conductive, the layer only has to be one-atom thick for it to work. When raindrops hit the graphene-coated solar cells, the salt in that water separates into ions. The Science News Journal explains, “The water actually clings to the graphene, forming a dual layer (a.k.a. pseudocapacitor) with the graphene electrons.” The difference in electric charge between those layers generates electricity. This prototype isn’t yet the most efficient solar panel. The top solar panels on the market today can convert up to 22.5 percent of the sunlight that hits them into electricity, while these new panels have a solar to electric conversion rate of just about 6.5 percent, reports The Telegraph. But they still could be a help, as solar panels generate 10 to 25 percent less electricity on gloomy days.”

“Buried in the supplementary information of a research paper published today is a domestic recipe for producing large quantities of clean flakes of graphene. The carbon sheets are the world’s thinnest, strongest material;  electrically conductive and flexible; and tipped to transform everything from touchscreen displays to water treatment. Many researchers — including Jonathan Coleman at Trinity College Dublin — have been chasing ways to make large amounts of good-quality graphene flakes.

In Nature Materials, a team led by Coleman (and funded by the UK-based firm Thomas Swan) describe how they took a high-power (400-watt) kitchen blender and added half a litre of water, 10–25 millilitres of detergent and 20–50 grams of graphite powder (found in pencil leads). They turned the machine on for 10–30 minutes. The result, the team reports: a large number of micrometre-sized flakes of graphene, suspended in the water. Coleman adds, hastily, that the recipe involves a delicate balance of surfactant and graphite, which he has not yet disclosed (this barrier dissuaded me from trying it out; he is preparing a detailed kitchen recipe for later publication). And in his laboratory, centrifuges, electron microscopes and spectrometers were also used to separate out the graphene and test the outcome. In fact, the kitchen-blender recipe was added late in the study as a bit of a gimmick — the main work was done first with an industrial blender.

Still, he says, the example shows just how simple his new method is for making graphene in industrial quantities. Thomas Swan has scaled the (patented) process up into a pilot plant and, says commercial director Andy Goodwin, hopes to be making a kilogram of graphene a day by the end of this year, sold as a dried powder and as a liquid dispersion from which it may be sprayed onto other materials. “It is a significant step forward towards cheap and scalable mass production,” says Andrea Ferrari, an expert on graphene at the University of Cambridge, UK. “The material is of a quality close to the best in the literature, but with production rates apparently hundreds of times higher.”