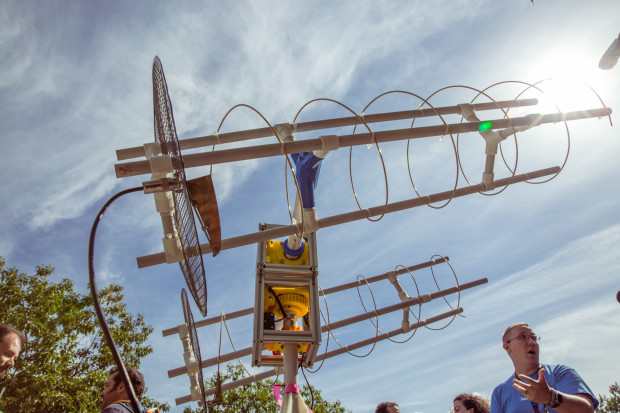 “The quickly dropping cost of access means that the number of small amateur satellites in Low Earth Orbit is increasing rapidly. However access to the data they’re transmitting isn’t necessarily getting easier. The Deep Space Network that NASA uses to talk to its spacecraft and probes isn’t available to your average amateur, and building your own ground station can be expensive. Using your own ground station also means that you have only a limited window to receive data from your satellite as it sweeps across the sky overhead. Which is where the SatNOGS project comes in, because if you have access to a 3D printer you can now put together your own ground station for between $300 and $400. Furthermore, the project gives you access to the community’s network of ground stations, which means that while you might not be able to see your satellite, it’s possible that someone else in the community can.

While we were at Maker Faire we talked with Pierros Papadeas and Corey Shields from the SatNOGS project about it, and how you can put together your own ground station. While the project isn’t yet offered in kit form, at least not yet, extensive instructions on how to put together your own station and get it connected to the SatNOGS network are available. The default configuration supports both VHF and UHF bands for reception. However the ground station is extendable both for transmission — so long as you have the appropriate amateur radio license — as well as to other satellite bands.

There is obviously a huge amount of work going into SatNOGS, it’s a worthy winner of last year’s Hackaday Prize. It, and other projects like it, show the power that new tools like software defined radios (SDR) and 3D printers are putting into Maker hands. Building something like this, for this amount of money, simply wouldn’t have been possible even a couple of years ago. Now all I have to do is find enough time to build my own ground station. Because who wouldn’t want a satellite ground station in their back yard?”

LINE of SIGHT
https://patriciogonzalezvivo.github.io/LineOfSight/
http://gizmodo.com/find-your-house-on-this-map-and-see-the-satellites-pass-1743261660
Find Your House On This Map and Watch the Satellites Passing Above You
by Kelsey Campbell-Dollaghan  /  11/18/15

“There are more than 2,250 satellites orbiting the Earth right now. But that abstract number didn’t prepare me for the shock of watching a Soviet-era rocket body whipping over my house in real-time. Then I watched an elderly Russian intelligence satellite glide over Seattle. A NOAA weather satellite slid by Newfoundland and the ISS passed over Sumatra, while China’s Tiangong manned station moved over the Mississippi River Delta. I was using Line of Sight, an extraordinary map created by Patricio Gonzalez, an artist and engineer at the open-source mapping startup Mapzen.

Satellites in orbit are moving at roughly 17,000 miles per hour, meaning they pass over your city in a matter of minutes, but that’s still enough time to spot them, if you know where to look—which has always been a challenge… until now. Using metadata about the thousands of orbiting satellites is available through sources like SatNOGS, Gonzalez’s map monitors satellites as they criss-cross the globe, allowing you to track specific spacecraft or learn when and where you should look to see those passing over your house. When I first opened up the map, I navigated to Lake Michigan, and watched as a satellite passed over Chicago, where I live.

A quick search of the name revealed the SL-16 is actually a rocket body built by the Soviet space program in the 1980s—essentially, space junk. There are actually 17 of them in orbit. It was part of a failed plan “to take over manned spaceship launches from Soyuz, but these plans were abandoned after the fall of the Soviet Union.” If it had been nighttime, I would have known where to look for the rocket body, which is about as bright as stars in the big dipper, according to Space Weather. The data Gonzalez used to create this map is readily available, and it’s not as though satellite-watching is a new idea. But for beginners, Line of Sight is a magical and visceral illustration of the spacecraft that make the modern world possible–turning them from an abstract idea into a blinking light, passing above your backyard. Go check it out here.”

“Early on, while developing SatNOGS, the SatNOGS team encountered the lack of a central and editable database for active satellite transmitters. Such information would be vital not only for SatNOGS operations but also for amateur radio operators interested in satellite telecommunications.

Over the past many years, lots of radio amateurs undertook the challenge by creating personal pages that would keep track of transmitter data, and although there are really fine examples of such efforts (props to PE0SAT,JE9PEL, OZ9AEC, AMSAT-UK and others) those are unfortunately not scalable approaches, that could easily become deprecated and are not easily exported for further usage.

Our solution was to create SatNOGS DB an open satellite transmitter database, that allows everyone to suggest transmitter information of active satellites and collaborate in keeping the database up-to date. SatNOGS DB information is freely and openly (CC-BY-SA) accessible via an API and a web application, to facilitate the needs of satellite radio operators across the globe.

Technically our current implementation is based on the Django Python framework. The code can be found here and we are looking for code contributors as always! Do you have any suggestions on how we can make SatNOGS DB better? File away issues here, so we can make DB better for everyone. If you are a satellite operator, or an amateur radio enthusiast and would like to make suggestions on populating SatNOGS DB don’t hesitate to check out our FAQ on how to do so.

The more transmitter information we have, the easier it is to communicate with many more satellites. So get those contributions started, and together let’s create the holistic, open and crowd-sourced satellite transmitter database once and for all!”