Go to many beaches in the developing world and you’ll see the same thing: piles of plastic garbage on the sand or in the water. Plastic pollution is a global problem, and an intractable one. People rely on plastic because it’s cheap. But none of it decomposes, and, often there’s no formal recycling service. Vancouver entrepreneur David Katz‘s solution: Give people incentives to collect garbage by creating value from the waste. In other words, make plastic pollution a “currency.” Katz’s organization, Plastic Bank, has a plan to set up recycling facilities in poorer countries, where locals can exchange plastic for a range of useful items and services. “If we can reveal the value in the things around us, then we can give people the opportunity to make a better life with that,” he says. Katz runs a successful GPS tracking business, but he’s long been horrified by plastic pollution and wanted to do something about it. He came up with the Plastic Bank after attending a meeting at the Singularity University in California, where he met Lorenzo Sousa, the founder of the railway company PeruRail. The businessmen plan to open the first Plastic Bank facility in Peru next April. 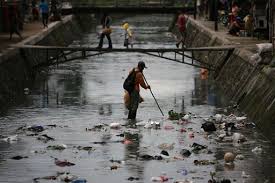 Pickers will be able to exchange mixed plastics for shoes, food, and other basic goods, and even use 3-D printing facilities to make their own items or parts. “Perhaps they’re working with waste from a gas station and the mechanics need components they can print on site. It gives them an opportunity to take the waste out of the environment and make something worth $5, $10, or $20,” Katz says.

The center will also offer training, so waste collectors can scale up their entrepreneurship and maybe create their own recycling facilities Katz says that a “major corporation” has agreed to take the plastic and create new products from it. He won’t reveal the name of the company, but says it can see marketing value in the concept. “Knowing that the plastic came from a waterway and that it helps people out of poverty through its collection and reuse–that’s a strong story.” After Peru, Katz wants to go other countries like Colombia, the Philippines, and Indonesia. He’s looking for local partners now. “I don’t have every answer yet. But I know it’s something that has to be begun at least,” he says. “If I begin it, I’ll find the answers, and, most importantly, I’ll reveal the questions I need to answer.”

With her small child in tow, a young woman trudges across the hazardous clutter of a vast, dusty rubbish dump in Pune, India, scanning for scrap to sell. This scene comes from the launch video of a social enterprise called Protoprint, but it is played out at waste dumps in developing nations across the world. Some 15 million people are thought to scavenge for saleable refuse. Protoprint’s scheme could soon improve the lives of some of these people.

The group’s aim is to train local pickers in Pune to collect high-density polyethylene (HDPE) plastic waste and then show them how to shred, melt and convert that plastic into the strands of filament that are the feedstock for one of the world’s burgeoning technology industries: 3D printing. It might sound a small market, but the idea has enough potential that a non-governmental organisation called TechForTrade in London is already establishing an ethics body to ensure it doesn’t lead to exploitation of the waste-pickers by, say, companies or gangs, the group told a conference in Nottingham, UK, last week.

Protoprint is the brainchild of MIT alumnus and social entrepreneur Sidhant Pai, who is developing the idea alongside SWACH, a Pune-based waste-collection cooperative that strives to get pickers decent prices for scrap. Dealers only pay about 15 cents per kilogram, often leaving people earning less than a dollar a day. “Our waste-pickers will earn 15 to 20 times more for the same amount of plastic,” says Pai. Pickers will collect the soft plastic bottles used for shampoo, detergents, sauces and medicines and bring them to the Protoprint filament lab near the dump. The plastic is cleaned and then passed through a gadget that Pai’s team has developed called the FlakerBot, which grinds and shreds the plastic into meltable flakes. These are then passed through another device – the RefilBot – which uses a rotating heating mechanism to create HDPE filaments 3 millimetres in diameter. Local car-parts companies, engineering universities and architectural practices have been lined up as customers for when the venture kicks off later this year.

The recycled filament – which will cost $13.50 a kilogram as opposed to about $30 for commercial filament – must be up to industry standards, says William Hoyle, head of TechForTrade, which seeks ways innovation can help people out of poverty. So he has set up the Ethical Filament Foundation to check recycled filament is up to scratch and to ensure pickers are not exploited. The foundation will work with Dutch 3D printer-maker Ultimaker and US design software house Autodesk to ensure standards are met. Such oversight is a strong idea, says Alexander Pasko, a 3D design specialist at Bournemouth University, UK. “Some filaments just break when you load them up. If they can maintain the quality of the filament and waste-pickers are paid more, everyone benefits.” Hoyle says he is also now preparing to work with groups in Oaxaca, Mexico, and Bogotá, Colombia, on similar projects. “We hope ethical filament will be to 3D printing what Fair Trade is to coffee,” he says.

When marine ecologist Andres Cozar Cabañas and a team of researchers completed the first ever map of ocean trash, something didn’t quite add up. Their work, published this month in the Proceedings of the National Academy of Sciences, did find millions of pieces of plastic debris floating in five large subtropical gyres in the world’s oceans. But plastic production has quadrupled since the 1980s, and wind, waves, and sun break all that plastic into tiny bits the size of rice grains. So there should have been a lot more plastic floating on the surface than the scientists found. “Our observations show that large loads of plastic fragments, with sizes from microns to some millimeters, are unaccounted for in the surface loads,” says Cozar, who teaches at the University of Cadiz in Spain, by e-mail. “But we don’t know what this plastic is doing.”

“The plastic is somewhere—in the ocean life, in the depths, or broken down into fine particles undetectable by nets.” What effect those plastic fragments will have on the deep ocean—the largest and least explored ecosystem on Earth—is anyone’s guess. “Sadly,” Cozar says, “the accumulation of plastic in the deep ocean would be modifying this enigmatic ecosystem before we can really know it.” But where exactly is the unaccounted-for plastic? In what amounts? And how did it get there? “We must learn more about the pathway and ultimate fate of the ‘missing’ plastic,” Cozar says.

Plastic, Plastic Everywhere
One reason so many questions remain unanswered is that the science of marine debris is so young. Plastic was invented in the mid-1800s and has been mass produced since the end of World War II. In contrast, ocean garbage has been studied for slightly more than a decade. “This is new mainly because people always thought that the solution to pollution was dilution, meaning that we could turn our head, and once it is washed away—out of sight, out of mind,” says Douglas Woodring, co-founder of the Ocean Recovery Alliance, a Hong Kong-based charitable group working to reduce the flow of plastic into the oceans. The North Pacific Garbage Patch, a loose collection of drifting debris that accumulates in the northern Pacific, first drew notice when it was  discovered in 1997 by adventurer Charles Moore as he sailed back to California after competing in a yachting competition. A turning point came in 2004, when Richard Thompson, a British marine biologist at Plymouth University, concluded that most marine debris was plastic.

Research on marine debris is also complicated by the need to include a multidiscipline group of experts, ranging from oceanographers to solid-waste-management engineers. “We are at the very early stages of understanding the accounting,” says Kara Lavender Law, an oceanographer at the Sea Education Association, based in Cape Cod, Massachusetts.  “If we think ten or a hundred times more plastic is entering the ocean than we can account for, then where is it? We still haven’t answered that question. “And if we don’t know where it is or how it is impacting organisms,” she adds, “we can’t tell the person on the street how big the problem is.” Law, along with Thompson, is one of 22 scientists researching marine debris for the National Center for Ecological Analysis and Synthesis at the University of California, Santa Barbara. The group is grappling with some of these questions and plans to publish a series of papers later this year. One of the most significant contributions made by Cozar’s team, says Law, was data collected in the Southern Hemisphere: “I can’t tell you how rare that is.”

Tens of thousands of tons of plastic garbage float on the surface waters in the world’s oceans, according to researchers who mapped giant accumulation zones of trash in all five subtropical ocean gyres. Ocean currents act as “conveyor belts,” researchers say, carrying debris into massive convergence zones that are estimated to contain millions of plastic items per square kilometer in their inner cores.

Cozar’s team was part of the Malaspina expedition of 2010, a nine-month research project led by the Spanish National Research Council to study the effects of global warming on the oceans and the biodiversity of the deep ocean ecosystem. Originally Cozar was assigned to study small fauna living on the ocean surface. But when tiny plastic fragments kept turning up in water samples collected by the expedition scientists, Cozar was reassigned to assess the level of plastic pollution. The two-ship expedition spent nine months circumnavigating the world. But Cozar also used data gathered by four other ships that had traveled to the polar regions, the South Pacific, and the North Atlantic to complete the map. The team analyzed 3,070 water samples. “One of the most striking observations was the conspicuous presence of plastic in the surface samples, even thousands of kilometers from the continents,” he says. “The plastic garbage patch in the South Atlantic Gyre was one of the most striking.”

This image depicts polystyrene microspheres inside the gills of a shore crab. {Credit: Andrew Watts}

Cozar says that one answer to the missing-plastic mystery is that some of the tiniest bits of plastic are being consumed by small fish, which live in the murky mesopelagic zone, 600 feet to 3,300 feet (180 to 1,000 meters) below the surface. Little is known about these mesopelagic fish, Cozar says, other than that they’re abundant. They hide in the darkness of the ocean to avoid predators and swim to the surface at night to feed. “We found plastics in the stomachs of the fishes collected during Malaspina’s circumnavigation,” he says. “We are working on this now.” One of the most common mesopelagic fish is the lantern fish, which lives in the central ocean gyres and is the main link in the tropical zone between plankton and marine vertebrates. Because lantern fish serve as a primary food source for commercially harvested fish, including tuna and swordfish, any plastic they eat ends up in the food chain. “There are signs enough to suggest that plankton-eaters, the small fishes, are important conduits for plastic pollution and associated contaminants,” Cozar says. “If this assumption is confirmed, the impacts of a man-sustained plastic pollution could extend over the ocean predators on a large scale.”