From the archive, originally posted by: [ spectre ] 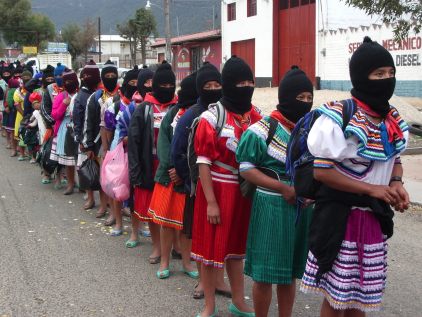 “The billboard posted along the scrubby highway running east in sultry, southern Tabasco state displays lush jungle, a sun-dappled iguana, and a flock of dazzling macaws. “We’re working for a better environment” the giant road sign radiates. The leafy graphic contrasts starkly with the blighted scenery of this tropical state whose rivers have been contaminated, the fish envenomed, and the corn fields blasted as the acid rain drips from the polluted sky thanks to the efforts of PEMEX, the national oil monopoly and its multiple transnational sub-contractors–Tabasco holds Mexico’s largest land-based petroleum deposits. But the billboard here in Macaspana, swampy oil-rich Chontal Indian land, was not posted by the Environmental Secretariat to inspire conservationism or even by PEMEX to burnish its tarnished image.  No, this pristine scene is signed off by a familiar U.S. name, in fact PEMEX’s largest subcontractor: Halliburton de Mexico, the Houston-based petroleum industry titan’s south-of-the-border subsidiary. Vice president Dick Cheney’s old mega corps and the largest oil service provider on the planet, has been doing business in Mexico for a score of years.

The privatization of PEMEX, nationalized in 1938 after depression-era president Lazaro Cardenas expropriated Caribbean coast oil enclaves from Anglo-American owners, was right at the heart of Mexico’s still-questioned July 2nd presidential election. Right-winger Felipe Calderon, a former energy secretary, is committed to selling off –or at least entering into joint agreements that would guarantee the contemporary version of the Seven Sisters a substantial quotient of Mexico’s diminishing reserves (only 10 more years according to the worst case scenario.) On the other side of the ledger, leftist Andres Manuel Lopez Obrador, a native of Macaspana who probably won the presidency July 2nd, advocates maintaining the state’s rectorship over PEMEX which accounts for more than 40% of the Mexican government’s annual budget, on the grounds that the oil wealth of the nation belongs to the Mexican people and no one else.

Knowing full well which side their bread was buttered on, transnationals like Halliburton rushed to support Felipe Calderon–as did the corporation’s former CEO (1995-2000) Dick Cheney and his running mate George Bush. Both Cheney and Bush have long-standing ties to the Mexican oil industry–Bush’s daddy ran Zapata Offshore, a PEMEX subcontractor back in the 1960s–his partner Jorge Diaz Serrano, a former PEMEX director, served time for an oil tanker kickback scheme. Cheney’s Halliburton somehow finagled its way into lucrative service contracts for the newly opened offshore Cantarell field (said to contain upwards of 12 billion barrels) back in the 1990s.

How Halliburton got in on the ground floor smells fishy to National Autonomous University professor John Saxe-Fernandez who watches strategic resources–the Cantarell contracts were assigned while Cheney was running the show in Houston and at the same time the Texas conglomerate was busy bribing Nigerian oil officials across the Atlantic. The truth is that the debate about privatizing PEMEX is no longer much of a debate. Petrolios Mexicanos has long since sub-contracted out virtually its entire exploration and perforation divisions to transnationals like Halliburton, Flouor-Daniels, and Bechtel, leaving PEMEX a virtual shell. Cheney’s old outfit has grabbed off the lion’s share of this billion-dollar boodle. Between 2000 and 2005, Halliburton picked up 159 contracts with the PEP (Perforation and Exploration) division for a total of $2.5 billion Yanqui dollars, about a quarter of PEMEX’s annual operating budget, according to Saxe-Fernandez. The contracts cover everything from slant and vertical drilling to maintenance of offshore platforms to logging out jungle for the perforation of 27 turnkey wells in Tabasco and Chiapas.

With 1250 employees and thousands of contract workers, Halliburton de Mexico has offices in Ciudad del Carmen, Campeche (the fast-shrinking Cantarell operation); Reynosa Tamaulipas where Dick Cheney’s boys are helping to exploit the Burgos natural gas fields; and Poza Rica Veracruz, a region in which Standard Oil’s Harry Doherty and Lord Cowry (Weetman Pierson), owner of what eventually became British Petroleum, once ruled with an iron fist and where Halliburton is now combing through what is left of their old Chicontepec field. Halliburton also maintains offices in Mexico City and Villahermosa Tabasco from which it oversees its off and onshore Caribbean domain. Mexico’s Gulf coast is not Halliburton’s only Caribbean operation. The KBR (Kellogg Brown Root) division of Cheney’s conglom built 207 cells at Guantanamo Bay Cuba in 2002 to house “enemy combatants.”  Halliburton has had a boot planted in the rebel-ridden state of Chiapas since 1997, three years after the Zapatista Army of National Liberation (EZLN) rose up in rebellion and declared war on the Mexican government, when the conglom built a natural gas separation plant in the north of that southern-most state. In 2003, Halliburton won a $20 million USD contract to expand natural gas infrastructure at Reforma–Zapatista autonomous communities lie south and east of the Halliburton installations.

Both PEMEX and Cheney’s associates have their eyes on Chiapas–ample reserves lie under the floor of the Lacandon jungle in areas where the Zapatistas have established their “Caracoles” or public centers, according to studies by UNAM political geographer Andres Barreda. Indeed, the first battle between the EZLN and the Mexican military took place near a capped well at Nazaret in the canyons that lead down to the jungle floor hard by where the Zapatista caracol “Road to Hope” (La Garrucha, the autonomous municipality of Francisco Gomez) now sits. According to closely-held PEMEX numbers unearthed by Houston oil investigator George Baker, Nazaret was putting out a million cubic feet of natural gas a day when it was capped back in the early 1990s–if Halliburton had been in the picture back then it probably would have picked up the contract and Dick Cheney, an avid if erratic hunter, would have gotten a chance to exterminate many endangered Lacandon jungle species.

In a religious mood, Vice President Cheney once wondered out loud why God did not put the oil under democratic countries, and with that mission in mind has set out to democratize foreign oilagarchies. His endeavor to bring democracy to Iraq have resulted in over 650,000 Iraqi dead, civil war, devastation and destruction in every corner of the land, and the systematic sabotage of that nation’s petroleum infrastructure. Now Cheney and his Halliburton associates are “democratizing” Mexico, having aided and abetted the stealing of the July 2nd presidential election from leftist Lopez Obrador–as noted above, Felipe Calderon is commited to the privatization of PEMEX. As a member of the Council of Communication which groups together transnationals doing business in Mexico, Halliburton helped pay for a vicious TV spot campaign that featured libelous hit pieces tagging Lopez Obrador as a danger to Mexico. Because only political parties can mount such campaigns, Halliburton’s participation was patently illicit according to Mexico’s highest electoral tribunal, the TRIFE.

Planted outside Halliburton de Mexico’s offices in a soaring skyscraper overlooking Paseo de Reforma where Lopez Obrador’s people would soon be encamped last summer, 80-year old former oil worker Jacinto Guzman remembered the great strikes (his father was a striker) that had impelled Lazaro Cardenas to expropriate the Caribbean complexes where Halliburton now rules, and bemoaned the depredations of Cheney Inc and others of their ilk against what belongs to the Mexican people. But, dressed in a wrinkled suit and hardhat, the old oil worker was even more vexed about Halliburton’s participation in the smear campaign to vilify Andres Manuel Lopez Obrador. “The gringos think they own our elections too” he complained to a U.S. reporter.”